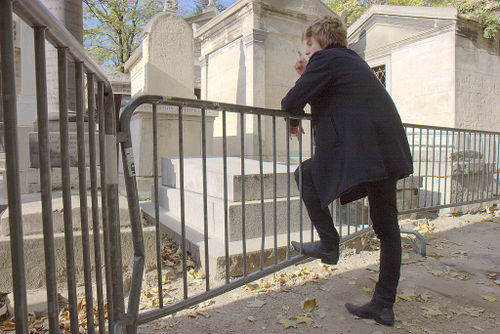 On the flight from CDG to ORD yesterday, a young woman is traveling with four small children, one a lap infant under two. She's in the middle seat two rows behind me, two of her kids are together in the row between, and another is in the middle seat next to me. He is maybe three years old and terrified, speaks only French. The baby had begun crying before they got through security and is still wailing, as he did throughout most of the eight-and-a-half hour trip.

I decide the little guy next to me needs his mother, so I offer to change seats with her. Of course, the two guys on either side of her and the crying baby are profusely thankful.

Introducing ourselves, I learn the man on my left is from Honduras. He has been living in Paris for 5 or 6 years with his French wife and children and is on his way home to Honduras. I ask what he does in Paris. He's a musical director, and he is going to Honduras to conduct an orchestra there.

Major flux in the whims of chance: when I was in Kansas City last month, I met and photographed Anton Krutz, a luthier whose shop is called K.C. Strings. Anton builds string instruments for musicians all over the world, and the day I visited his shop he was expecting the director of the Honduran symphony to arrive within a day or two to audition a full complement of stringed instruments for his orchestra. This would give the orchestra a rare, unified sound, making it perhaps the only orchestra in the world with all its strings of the same provenance.

I had meant to find out more about the outcome of the deal but hadn't yet done so, distracted by preparations for my last-minute trip to Paris.

Ahh, I asked my seatmate, did the Honduran symphony just receive all new stringed instruments from a shop called K.C. Strings in Kansas City?

It turns out that my seatmate, Jorge Luis Banegas, is going to Honduras for three weeks to conduct this same symphony, and it's his friend whom he is meeting in Honduras who was shopping for the instruments. How thrilling to be able to tell him I have a few hundred images of the master luthier and the atelier in Kansas where the instruments were produced.